How’s that “transitory” inflation working out for you? It’s going to be a lot worse. 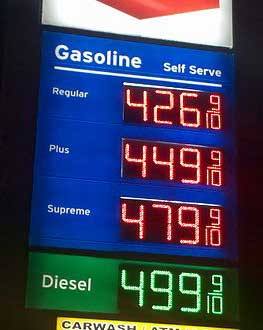 The world economy seems to be in an accelerated and precipitous decline which will make the 2007 to early 2009 downturn seem like a walk in the park. The world financial system is temporarily been on life support by trillions of printed dollars that governments call money. But the effect of this massive money printing is ephemeral since it is not possible to save a world economy built on worthless paper by creating more of the same.

The hyperinflationary depression that many western countries, including the US and the UK, will experience is likely to mark the end of an era that has lasted over 200 years since the industrial revolution, reports Egon von Greyerz of Matterhorn Asset Management.

Hot money in inflation mode
The Fed’s cheap money, or near-zero interest rates, after having failed to inspire much lending and borrowing from banks and consumers, is for sure leading investment banks and hedge funds to make big bets on such things as gold. Eton Park Capital Management LP, a hedge fund, revealed it took a big stake in the SPDR Gold Trust ETF on Monday with a regulatory filing,” reports Marketwatch.

Is Silver Ready to Move Higher ?
There are several compelling reasons to consider adding physical silver to your precious metal portfolio. But, why isn’t silver receiving the same attention as gold? Silver is still in stage one of its bull market, while gold is already in stage two. Bull market first stages are always marked by apathy….and disbelief that any uptrend is sustainable. Those conditions explain what happened to gold, when it was under $1,000/oz. Only when it hurdled that psychological barrier did gold start receiving widespread attention of its attributes and upside potential,” reports James Turk at GoldMoney.

Protect yourself from inflation with silver bullion coins. 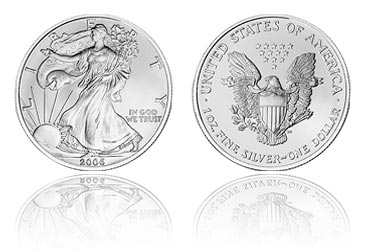 Perhaps the most popular way to accumulate silver bullion coins is with the American Eagle Silver Dollar. Unlike silver medallions, silver bars, or art bars, American Eagles are Official Legal Tender guaranteed by the U.S. Government as to silver weight and silver purity.

Highly prized for their historical beauty and pure silver content, American Eagle Silver Dollars are the largest Silver Dollars ever issued by the U.S. Mint. By law, each coin contains one full troy ounce of 99.9% pure silver and is 40.6 mm (1.598 inches) in diameter.  Requiring no assaying, American Eagles are easily converted to cash at any time and are recognized around the world.

Created due to popular demand from international investors, the Perth Mint’s Lunar design theme is secure for another 12 years with the introduction of the Australian Lunar Silver Bullion Coin Series II.

Year of the Tiger Design
The reverse of each coin depicts a tiger lying under a tree. As well as the inscription ‘Year of the Tiger’ and the Chinese character for ‘tiger’, the design also incorporates The Perth Mint’s ‘P’ mintmark.

Australian Legal Tender
Issued as legal tender under the Australian Currency Act 1965, each coin features the Ian Rank-Broadley effigy of Her Majesty Queen Elizabeth II on its obverse.

How to Survive a Recession

A Savings Account More Valuable than Gold and Silver

Keeping Your Money Safe When the SHTF