Ron Paul recently told Newsmax why he has called for abandoning the Federal Reserve System and returning the nation to a gold and silver standard.

“It’s not so much that gold is perfect, it’s that paper is insane. To give politicians and bureaucrats and secret bankers the license to counterfeit money and create money out of thin air is destined to fail, and it has. That’s why we’ve had this financial bubble develop since the linkage to gold has been severed in 1971…

“Now they’re trying desperately to print and spend, but the bubble was overwhelming and the bursting of this bubble is something they can’t contain. It would never happen under a gold standard because there would be no legal right for our central bank to spend money and create money out of thin air. The arrogance of it all is unbelievable.

“If we continue doing what we’re doing now, we will literally destroy the dollar.”

Coin World reports that the feds are looking to seize liberty dollars from collectors and those using the coins instead of inflation-ridden Federal Reserve notes.

Officials with the U.S. Attorney’s Office said on August 24 that the coins are contraband. The Secret Service, the federal agency responsible for confiscating counterfeit money, did not provide any definitive comments concerning under what circumstances Liberty Dollars would be seized, according to Paul Gikes of Coin World.

The coins are illegal even if they are not used for barter, the feds insist. Jill Rose, chief of the August 24 that the Liberty Dollar medallions are confiscable as contraband if they are being exhibited for educational purposes or held privately.

Rose was the lead prosecutor in the Bernard von NotHaus case. Von NotHaus is the creator of the Liberty Dollar. He was convicted by the feds in March on multiple charges involving the alternative currency that competes with fiat money distributed by the privately owned Federal Reserve. During the trial it was determined that Liberty Dollars are counterfeits, contraband and subject to seizure.

Von NotHaus was convicted by a jury after the feds successfully argued that Liberty coins are counterfeits because they include the words “Trust in God,” similar to the words “In God We Trust” on Federal Reserve coins. He faces up to 15 years in jail, a $250,000 fine, and may be forced to give $7 million worth of minted coins and precious metals – weighing 16,000 pounds – to the government.

The prosecution and conviction of von NotHaus was politically motivated. He is the founder of NORFED, the National Organization for the Repeal of the Federal Reserve and the Internal Revenue Code.

Following the verdict against von NotHaus, the government characterized him as a domestic terrorist.

“Attempts to undermine the legitimate currency of this country are simply a unique form of domestic terrorism,” said U.S. Attorney Tompkins. “While these forms of anti-government activities do not involve violence, they are every bit as insidious and represent a clear and present danger to the economic stability of this country,” she added. “We are determined to meet these threats through infiltration, disruption, and dismantling of organizations which seek to challenge the legitimacy of our democratic form of government.” (Emphasis added.) 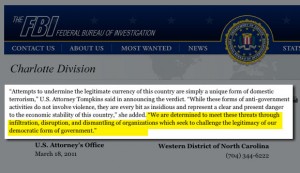 The Liberty Dollar raid was indistinguishable from “similar raids conducted by Soviet and Chinese communist officials against private businesses operating in those countries,” writes Jacob Hornberger. “Unfortunately, in the post-9/11 world in which we now live, anything goes as far as federal power is concerned. The heavy-handed, perhaps even fraudulent, Soviet-style attack on NORFED is proof-positive of that.”

Coin World had previously published comments from the U.S. Attorney’s Office in Charlotte stating that while mere possession of Liberty Dollar medallions was not a violation of federal statutes, actual use or intent to use them in the manner for which von NotHaus was convicted would be considered a violation.

George Ogilvie, the public affairs officer for the federal agency, told the publication the Secret Service had no comment on the matter.

It now appears the feds are moving to criminalize mere possession. Collectors are now at risk, especially if they oppose the Federal Reserve and are politically active.