The establishment media is extending kudos today to vice president Joe Biden for hammering out a deal that supposedly averted the so-called fiscal cliff. 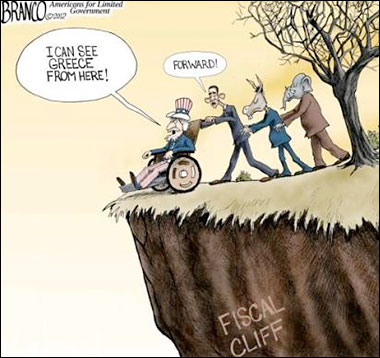 “I want to thank the work that was done by my extraordinary vice president, Joe Biden,” Obama said late Tuesday night.

“It was the fateful decision that put the Senate and White House on the pathway to the deal eventually approved by the Senate and the House, ending weeks of drama over the fiscal cliff,” the National Journal reports this morning.

But the deal allegedly averting crisis is anything but good news for the American people despite the backslapping on Capitol Hill and the sighs of relief in the corporate media.

In addition to kicking the fiscal can down the road, the so-called compromise finally did away with the illusion that Republicans are opposed to increasing the tax load on millions of Americans.

The Congressional Budget Office reports the deal cuts only $15 billion in spending while increasing tax revenues by $620 billion, what amounts to a 41:1 ratio of tax increases to spending cuts.

The Senate bill allows the so-called payroll tax holiday to expire, which will raise taxes on all Americans who earn an income. Democrats said this is not the case, that taxes will not rise, but the truth is the tax burden on working Americans will go up by at least 2 percent.

The wealth creators and producers — the entrepreneurs, small business owners, and maligned “rich” taxpayers — earning over $400,000 will see their top tax rate increase to 39.6 percent.

In addition, the double tax on dividends and capital gains will increase from 15 percent to 20 percent, thus adding more disincentive for the producers to create wealth that translates into jobs and prosperity for millions of Americans.

The supposed compromise adds incrementally to the long-term goal of impoverishing America and making sure its ability to create wealth is irreparably broken.